As you know, in recent weeks we have seen social distancing become the new norm, as many of us find ourselves in quarantine or under strict shelter-in-place orders. The ways in which so many of our lives have drastically changed have left many with feelings of uncertainty, anxiety and restlessness.

At a time when we are all worried about our own families – and rightfully so – I want to remind everyone that we must also remember to reach out to those who may need it most. This includes our veteran population, particularly those already suffering from post-traumatic stress (PTS) and other mental health conditions.

The feelings of loneliness and isolation, which a number of Americans may be experiencing for the first time in their lives at such heightened levels, are unfortunately all too familiar for many of our veterans living with PTS. With the onset of COVID-19 and the precautions that we all must take in order to stay safe, these feelings of loneliness and isolation have the potential to become elevated to new extremes.

Please consider the reality that our country’s veterans are already facing:

My intent in sharing these statistics is not to be negative or pessimistic. Quite the opposite. I hope sharing these statistics with you will help paint a more complete picture and incite a sense of urgency regarding what is at stake for many of our country’s veterans. I am optimistic that sharing this information will encourage others to reach out to veterans in need and possibly even provide a much-needed sense of comfort during these difficult times.

Here are just a few ways that you can reach out to veterans who may be struggling:

The bottom line is, it’s important that we are checking-in on those veterans already struggling with PTS and other mental health conditions, while observing safety measures to ensure that we all remain physically healthy. Checking-in on our veterans to lend a listening ear or a helping hand today could very well impact the way the statistics above look tomorrow. 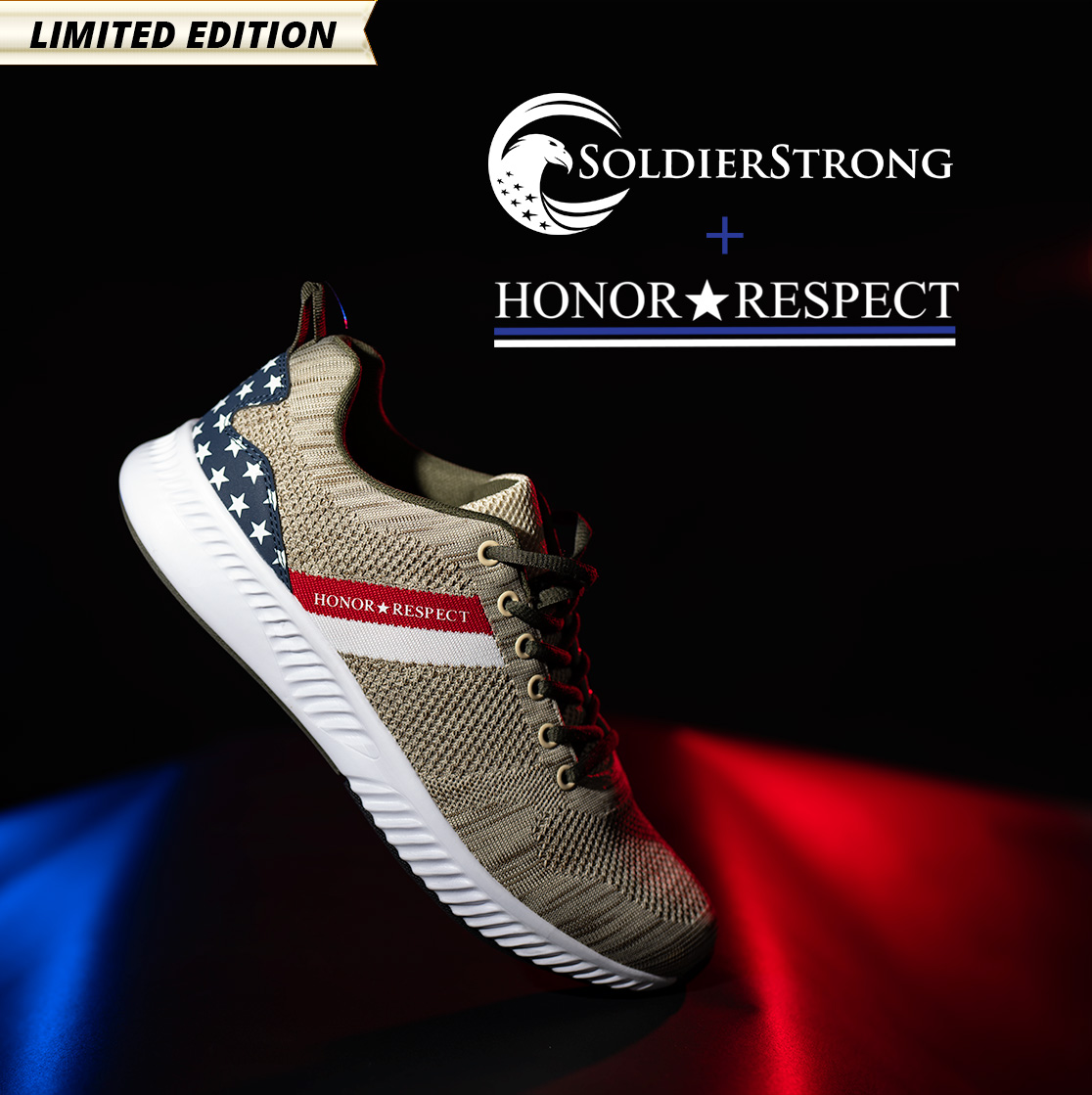 Honor and Respect is a Marion, Iowa, firm launched in 2018 by U.S. Air Force veteran Ron Slagle and his family to raise funds to aid first responders and military personnel, who “devote their lives to helping all of us” and are caught in the midst of the mental health crisis through the sale of one-of-a-kind athletic shoes. Slagle said Honor and Respect will donate a share of its proceeds from every purchase of its shoes to SoldierStrong’s StrongMind initiative, which seeks to reduce the disturbingly high national average of 20 veteran suicides a day. Through the partnership, SoldierStrong will receive $10 of every purchase of Honor and Respect’s shoes.

He continued, “It’s important that all revolutionary technologies to treat PTS are available to any and all veterans who might benefit from these services. That’s why it is SoldierStrong’s mission to get the StrongMind program into as many VA Hospitals as possible, so that the greatest number of veterans can have access and the chance to benefit from the effective technology in an effort to relieve their PTS symptoms.”

The Therapy+ software suite, included with each Indego Therapy device, incorporates control algorithms based on proven motor learning principles and allows for an individualized, patient-centric training approach where the device responds to a patient’s active contribution and assists in gait only when necessary. Additionally, therapists have a range of customizable settings within the Therapy+ software suite which allows them to further tailor the behavior of the system to specific impairment and gait needs.

Dr. Marika Hess, Acting Chief, Spinal Cord Injury (SCI) noted that currently, VA Boston has an exoskeleton model in use. “The donation of this type of device allows us to have more device options for our Veterans who meet the medical clearance and FDA criteria to allow for robotic-assisted ambulation post spinal cord injury,” Hess said. “When a veteran takes his or her first steps, in some instances, the ability to ambulate in these devices can be life-changing.”

SoldierStrong co-founder Chris Meek said the state’s concentration of military personnel and veterans was a factor in the donation.

“There are more than 383,000 veterans in Massachusetts alone and almost one-fourth of them rely on some type of medical care from the VA, according to the U.S. Census Bureau. The VA and its staff are dedicated to providing the best care to those veterans, but it’s important that groups like SoldierStrong stand with them to achieve that mission,” Meek said. “With advanced medical technology and expertise saving more and more servicemen and women who suffer severe injuries – especially on the battlefield – there’s an ever-growing need for exoskeletons and similar devices to make rehabilitation as effective as possible. We’re extremely proud to help as many veterans as we can so that they will experience the physical and emotional benefits of standing and walking again.”

A veteran, who had experienced a spinal injury, demonstrated his new-found ambulation abilities using the exoskeleton during the event.

Meek said the organization’s goal to help as many Veterans as possible was a significant factor in the local donation. Since SoldierStrong’s inception after 9/11, the Stamford, Conn.-based group has donated more than $3 million of medical devices to help injured veterans. Today’s donation is the organization’s 23rd exoskeleton donation and the second for VA Boston. 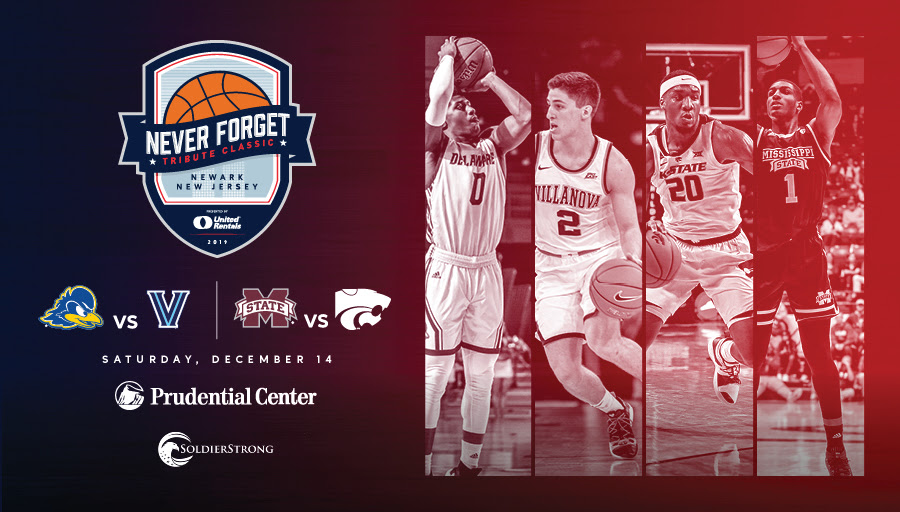 SoldierStrong has partnered with the 4th Annual Never Forget Tribute Classic on December 14th, with ticket proceeds going to support the men and women of the armed forces that sprung into action, protecting our freedom in the wake of 9/11. This neutral site, college basketball double-header brings some of the best teams to the Prudential Center each year. This year’s tournament features the Delaware Blue Hens vs Villanova Wildcats and the Mississippi State Bulldogs vs Kansas State Wildcats.

Delivering on its commitment to assist soldiers in taking an academic step into their future by filling in voids left by the Post-9/11 GI bill, the national nonprofit organization SoldierStrong announced the 2019 recipients of its scholarship initiative, SoldierScholar, today.

“SoldierStrong realized early on that education offers some of the best opportunities to members of the military once they return home from abroad,” said SoldierStrong co-founder Chris Meek. “SoldierStrong understands that there are, and always will be, more steps forward that need to be taken in making education more accessible for soldiers. It is an honor to support soldiers in such endeavors.”

The annual scholarships are available to veterans who fought in the recent War on Terror.

SoldierStrong, which also provides revolutionary medical technologies to help injured veterans lead full lives, launched SoldierScholar in 2012 and has awarded more than $500,000 since then. This year’s recipients include:

Philip DeTurck, Global Policy and Security, Georgetown University
Philip DeTurck graduated from the U.S. Naval Academy as a naval officer with a bachelor’s degree in international relations and a minor in Chinese. DeTurck was selected as the first-ever student to work as an intelligence analyst for the Defense Attaché Office at the U.S. Embassy in Beijing. DeTurck hopes to continue in a specialized study of global politics and security at Georgetown University.

Jessica Evans, Civil Engineering Technology, Old Dominion University
Jessica Evans served in the Army National Guard from 2009 to 2015 and served in Iraq in 2011 as a part of Operation New Dawn. Evans is working on a dual degree and is expected to graduate from Old Dominion University with a bachelor’s degree in civil engineering technology in 2020.

Daniel Cordial, Public Administration, Syracuse University
Daniel Cordial served in the U.S. Army from 2006-2011, earning the rank of sergeant. Cordial mobilized twice in Operation Iraqi Freedom and again in Operation New Dawn. He is currently enrolled in the Executive Master of Public Administration program at Syracuse University with a focus on international and national security policy and is expected to graduate in May 2020.

“Receiving a SoldierScholar scholarship gives me incredible peace of mind,” Roberts said. “This scholarship will help me accomplish my short-term goal of obtaining my graduate degree, help me continue to serve my country with the FBI and will offer me financial stability in the years to come. Education is critical to success and this scholarship helps me make my success a reality.”