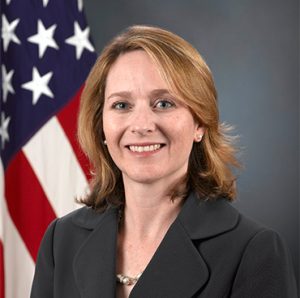 Kathleen Hicks is senior vice president, Henry A. Kissinger Chair, and director of the International Security Program at CSIS. She is a frequent writer and lecturer on U.S. foreign and security policy; defense strategy, forces, and budget; and strategic futures. From 2009 to July 2013, Dr. Hicks served as a senior official in the Department of Defense. Confirmed in May 2012 as principal deputy under secretary of defense for policy, she was responsible for advising the secretary of defense on global and regional defense policy and strategy pertaining to such areas as the Asia-Pacific and Persian Gulf regions, Syria, and Europe. She also served as deputy under secretary of defense for strategy, plans, and forces, leading the development of the 2012 Defense Strategic Guidance and the 2010 Quadrennial Defense Review and crafting guidance for future force capabilities, overseas military posture, and contingency and theater campaign plans.

From 2006 to early 2009, Dr. Hicks served as a senior fellow at CSIS, leading a variety of research projects in the national security field, including as part of the Center’s Beyond Goldwater-Nichols series. She was a career civil servant in the Office of the Secretary of Defense from 1993 to 2006, serving in a variety of capacities and rising from Presidential Management Intern to the Senior Executive Service. Dr. Hicks has received numerous recognitions for her service in the Department of Defense (DOD), including distinguished awards from Secretaries of Defense Chuck Hagel, Leon Panetta, and Robert Gates and from the Chairman of the Joint Chiefs of Staff General Martin Dempsey and the 2011 DOD Senior Professional Women’s Association Excellence in Leadership Award. She holds a Ph.D. in political science from the Massachusetts Institute of Technology, an M.A. from the University of Maryland’s School of Public Affairs, and an A.B. magna cum laude and Phi Beta Kappa from Mount Holyoke College. She previously served as an ex officio member of the Board of Directors for the U.S. Institute of Peace and currently serves on the Board of Advisors for the Truman National Security Project. Dr. Hicks is also a member of the Council on Foreign Relations and an adjunct with the RAND Corporation.