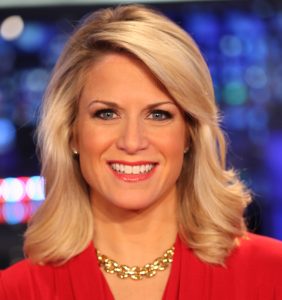 Martha MacCallum of the Fox News Channel and her co-anchor, Bill Hemmer can be seen weekday mornings from 9-11 am on “America’s Newsroom.”It is the top-ranked program in its timeslot and is consistently in the top ten for all cable news programming, outperforming all of the competition’s PRIMETIME programming.

Martha MacCallum is an integral part of Fox’s Election Team – covering 4 cycles of midterm elections and 3 Presidential elections in ’04, ’08, and 2012. She has interviewed President Obama, Mitt and Anne Romney, Senator John McCain, Laura Bush, and an extensive list of presidential and congressional candidates on the campaign trail. Her wide-ranging interviews include General David Petreaus, Rudy Guiliani, and New Jersey Governor Chris Christie.

She has also covered major international and national stories including the terror attack at the Boston Marathon, The Royal Wedding, Hurricane Katrina, the funeral of Pope John Paul II. She can often be seen on Fox News in primetime, and in weekly segments with Bill O’Reilly and is a frequent guest on IMUS in the morning. In addition to her work with SoldierStrong, Martha has highlighted numerous military achievements on America’s Newsroom. Her coverage has included the accomplishments and personal stories of The Green Beret, Navy Seals, and has had extensive coverage of medal winners for extreme bravery in Afghanistan. Including interviews with Navy Seal Rob O’Neil and Medal of Honor Dakota Meyer.

At NBC, she covered business news and reported from the floor of the New York Stock Exchange. She was the anchor and editor, of CNBC’s “Checkpoint,” an evening news program focusing on the War on Terror. A frequent contributor to “The News with Brian Williams,” and NBC’s “Today,” show, she was twice the recipient of the Gracie Allen Award, given by the Foundation for American Women in Radio and Television.

MacCallum joined the Advisory Board of SoldierStrong in 2014.

Watch an exclusive interview with Martha MacCallum and Chris Meek, Founder of SoldierStrong.