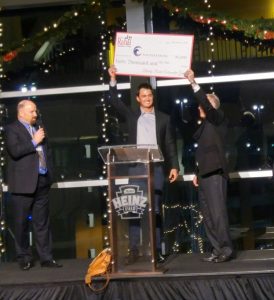 In honor of Veterans Day, Team Rahal announced a donation would be made to SoldierStrong for every new and used vehicle sold at its central Pennsylvania and Pittsburgh region dealerships during November. In addition, commemorative T-shirts were sold.

“This is a cause that we knew our team members and clients would be able to come together for,” said Ron Ferris, Chief Executive Officer, Bobby Rahal Automotive Group. “We are proud to support the good work done by SoliderStrong because we know it directly improves the lives of our heroes, the men and the women of the U.S. armed forces. We thank the people of western and central Pennsylvania who joined in this very worthy cause.”

Chris Meek, chairman and co-founder of the Stamford, Conn., organization, noted the Rahal family’s commitment to America’s veterans extends beyond its most recent generous gift.

“Bobby’s son, IndyCar driver Graham Rahal, also demonstrates his tremendous support for SoliderStrong through his race team’s program, Turns For Troops. For every lap Graham Rahal completed in the 2018 Verizon IndyCar Series, sponsor United Rentals donated $50 to SoliderStrong,” Meek said.“Raising nearly $500,000 since 2016, the Rahals and the Rahal-Letterman-Lanigan race team are literally helping veterans who have suffered spinal injuries take their next steps forward. We’re so proud of our partnership with Team RLL and its continuing support for America’s military veterans who have sacrificed so much in defense of our freedom.”